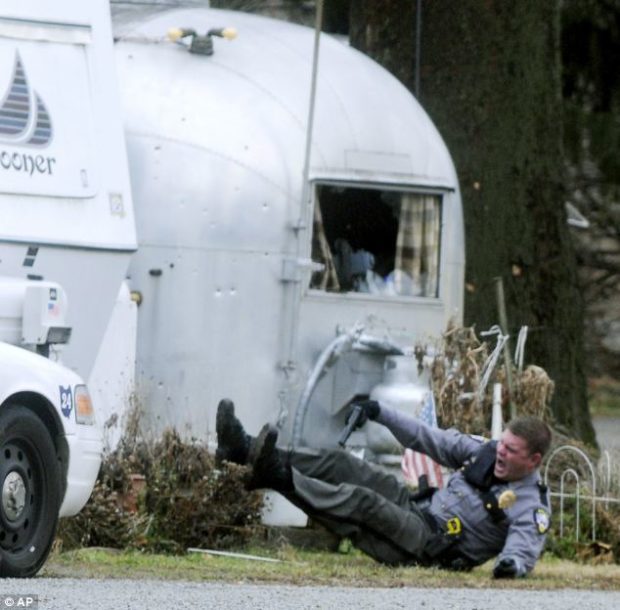 It’s been a few years since two officers were shot in a dramatic gunfight in a trailer park in Enon, Ohio.   The gunfight was even more remarkable considering that there was a photographer on scene taking photos as the shots rang out.  I still regularly think about that photograph (above) of the falling officer who has just been shot.

Bullets generally don’t make people fall. They don’t knock people off of their feet. The laws of physics are still in play. “Every action has an equal and opposite reaction.“. If a bullet had enough power to knock people down, the recoil would knock the shooter down.

So, why do people fall when shot?

Sometimes the bullet hits a support structure like a leg or hip bone. Sometimes the surprise just overwhelms the body. Sometimes people fall because that’s what they’ve been subconsciously programmed to do after seeing people fall in countless movie gunfights.

It doesn’t really matter. Just recognize you may fall in a gunfight. Be able to continue the fight from wherever you may end up.

Take another look at that picture.  Imagine yourself in that position.  Could you draw your gun?  Those of you who carry in pants pockets, in the small of your back, or in an off-body holster may be out of luck.

Unload your CCW gun,  Triple check it both visually and physically to ensure that it is unloaded.  Put it in the holster you use for daily carry.  Conceal the gun under a cover garment similar to what you wear when out in public.  Can you draw (preferably without muzzling yourself):

From the standing position?

From a kneeling position?  One knee?  The other knee?  Both knees down?

Sitting on the ground?

Laying on your side? Both sides?

Laying on your back?

Laying on your stomach?

Give each of these positions a try with your unloaded gun.

Then try to draw from each position using your dominant hand only.

Finally, give it a try with your weak hand only.

If you can’t draw your weapon with either hand from any position you may find yourself in, I would submit that your carry location is sub-optimal.