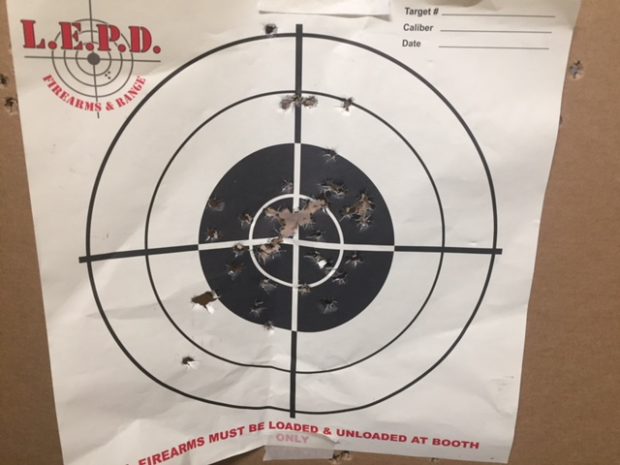 I think that is a wonderful idea.  I plan on sharing the drills I shoot in my weekly practice sessions.  Hopefully, you will get a little value out of my posts.  If you like them, I’d like to hear about it.  Likewise, if you think I am wasting my time, let me know that too.  You can contact me HERE.

Today’s practice session was held at my local indoor range.  I was fortunate to be the only shooter there this morning, so I was able to use the shot timer pretty easily.

I started out shooting my G-19 at the Guerrilla Approach Consistency Target that I wrote about yesterday.  This is the second time I’ve shot the drill.  Last time I did it with my G-17.  I don’t know if I was having an off day or what, but my score and times today with my G-19 were significantly worse than when I shot it last week.

I ran the drill twice.  The first time I shot it in 34 seconds and had seven misses.  My second round through was a little better.  I ran it in 33 seconds with three misses. 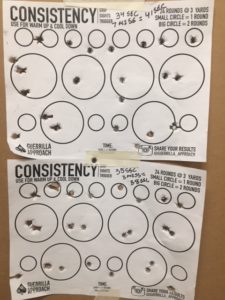 After doing so horribly there, I decided to spend some more time shooting small dots.  A reader sent me a dot target he had made up and I gave it a couple tries.  That drill takes 29 rounds and is shot with two hands and one handed, depending on the dot being shot.  I ran the drill twice. 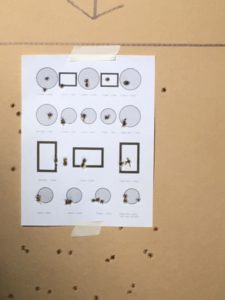 New dot target sent in my a reader

As I started each of my dot drills with a full magazine, I had three partial magazines left.  I put up 4″x 6″ post it notes at 15 feet.  I used the remainder of the rounds in the magazine doing two handed “tempo” shooting.  On the first target, I fired the rounds with a one second split.  On the second target, I shot 1/2 second splits.  On the third target I fired as fast as possible still getting hits (around .3 seconds each). 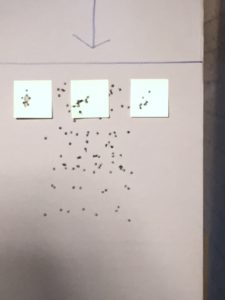 I finished the session with 50 rounds out of my .38 snub.  As I mentioned in a previous article, I really like Claude Werner’s Indoor Range Practice Sessions drill book for shooting my smaller guns.  I used his “establishing a baseline” drill with my .38.

The drill is shot from the ready position with two hands on the gun.  I fired at a bullseye target, but it was designed to be fired at a full silhouette.

The drill is repeated at the three, five, seven, and 10 yard lines.  I’m happy to say that I kept most of my rounds in the black on this one.  Claude’s drill is 48 rounds.  I finished the box by firing one round right handed and one round left handed at 10 yards. 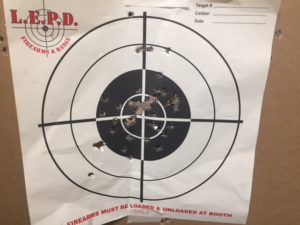 It looks like I shot better with the revolver today than I did with my Glock.  That’s ok.  It gives me room for improvement.