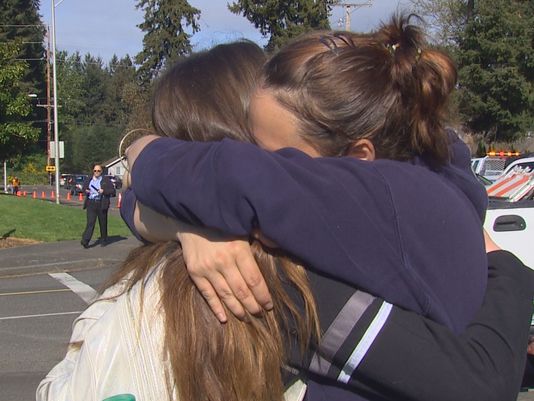 On Monday, April 28th, 2015, a sophomore student in Lacey, Washington walked into a commons room and fired two shots with a revolver.  One shot hit the ceiling and one shot hit the floor.  No one was injured in the shooting.  The shooter was stopped by an unarmed teacher who tackled him immediately following his second shot.  Several other staff members and a school resource officer subdued the teen, disarmed him, and affected his arrest.

Preliminary statements from the police department are saying that the student was attempting a “suicide by cop” and had no intentions of hurting anyone but himself.  For more information, check out the article and link HERE.

Since there weren’t any dead school kids, and the shooter didn’t use an “assault weapon.” the media had little interest in the story and it faded from the headlines in about a day.

It sounds to me that it was just a screwed up kid who wanted to die.  That may not merit an extensive discussion, but there are a few learning points we can take from the incident:

1) Timing- We are seeing more and more school shootings occurring very early in the school day.  This one occurred at 7:30 am.  The longer the day goes on, the more likely chance that the student’s gun will be discovered or that he will start to have cold feet about the shooting.  Schools should be training active shooter response drills in the time BEFORE school actually starts.  No schools are doing this, and shooters are using this to their advantage.

2) Location- Notice that the student here chose a large “commons area” for firing his shots.  Large rooms like commons areas, lunch rooms, and gymnasiums hold more bodies, less cover, and are much harder to evacuate/lock down.  School shooters know this and exploit the fact just like they do with the timing of their attacks as mentioned above.  Well trained and clear thinking school personnel should be assigned to monitor these large open rooms any time students are present.  Evacuation/lockdown drills should focus on these areas as well.

3) The shooter wasn’t a “misfit” or bullied.  Listen to the interview with the shooter’s classmate.  She stated that he was a popular student and he wasn’t bullied in his school.  Kids who shoot up schools aren’t always the ones that you might expect.  They are rarely the students who are picked on the most.  The best way to identify a future school shooter isn’t by looking for a bullied kid wearing a black trench coat.  It’s by paying attention to what the students say, write, and research.  Most school shooters spend an incredible amount of time researching (and talking about) their plans.  Pay attention and don’t ignore or rationalize any warning signs you might see.

4) The shooter was stopped by an unarmed citizen.  Most folks don’t realize it, but more active killers are stopped by unarmed bystanders than are stopped by police.  Just because you are in a “gun free zone” doesn’t mean all hope is lost.  A courageous teacher deflected the gun and tackled the student.  This happens more often than you might think.  Have you practiced how you might deal with an active killer in a situation where you might be unarmed?

One other point to note:

Modern school shooter response plans embrace the notion or “Run, Hide, Fight” in that order.  What would have happened here if the courageous teacher would have run instead of going after the shooter?  I postulate that there would be some dead bodies (if only the shooter himself getting his death wish granted).  Sometimes “Fight” becomes more important than “Run.”  You need to be able to recognize what situations call for which responses.

Fortunately, no one was killed in this school shooting.  Use an event like this as a pre-planning tool.  If you are a parent with school age children, discuss it with them and plan a response.  Parents should also discuss the points I raised above with school staff to ensure that adequate planning is being conducted by their child’s school administrators.