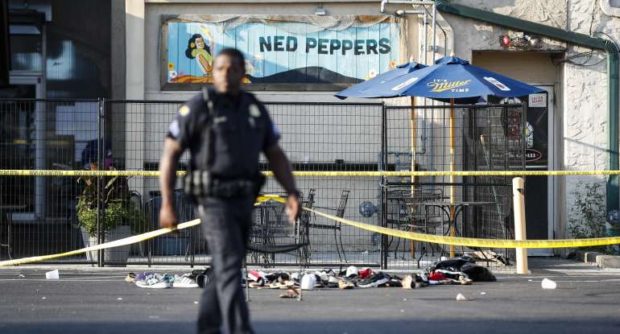 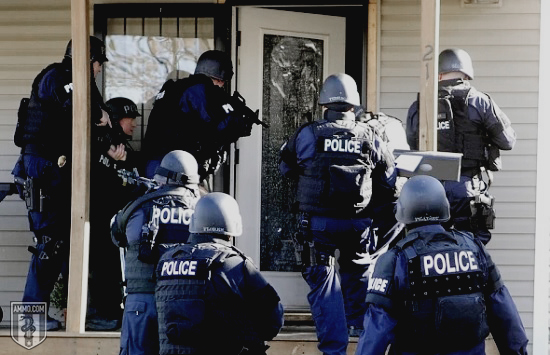 An in-depth, state-by-state look at the “red flag” laws currently on the books in this country. 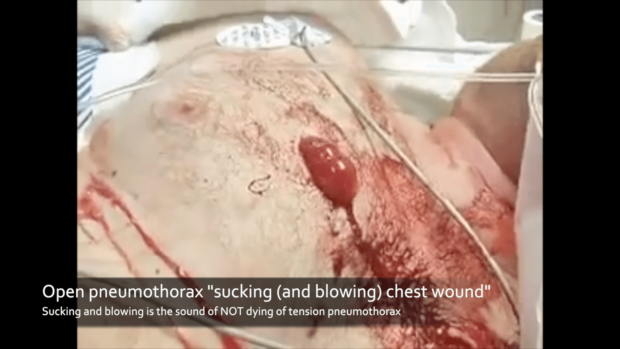 A good discussion of the difference between an open pneumothorax and a tension pneumothorax.  Our current battlefield medical doctrine is to cover all these holes with a vented chest seal.  Other countries do not seal open thoracic injuries and there is a relatively small amount of medical evidence supporting the practice.

If you have no idea what I am describing, watch Kerry Davis’ chest seal basics video.  You should also know about pressure dressings. 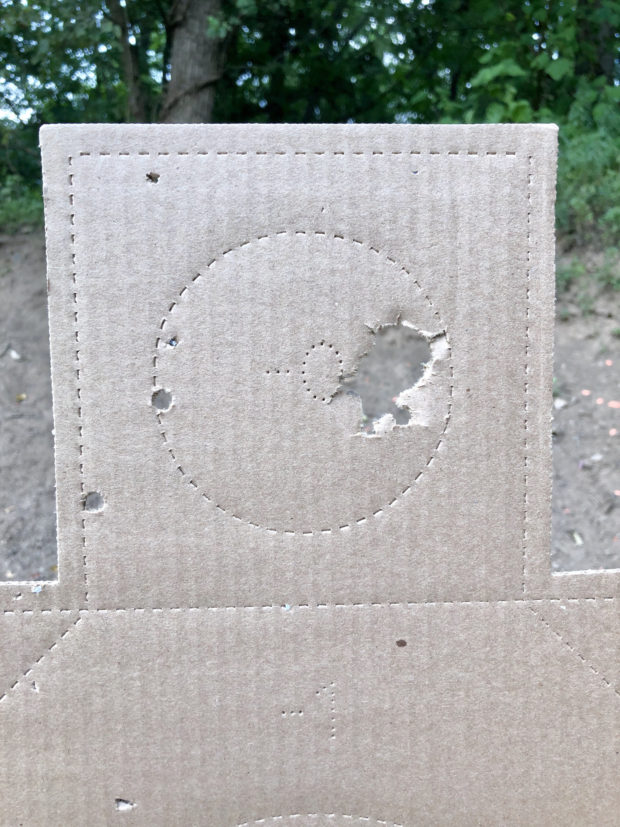 I was hopeful that this one might perform better.  Nope.  Stick with the Federal flight control or Hornady Tap 00 Buck loads for defensive purposes.

Arm Thy Neighbor, by Matt Bracken 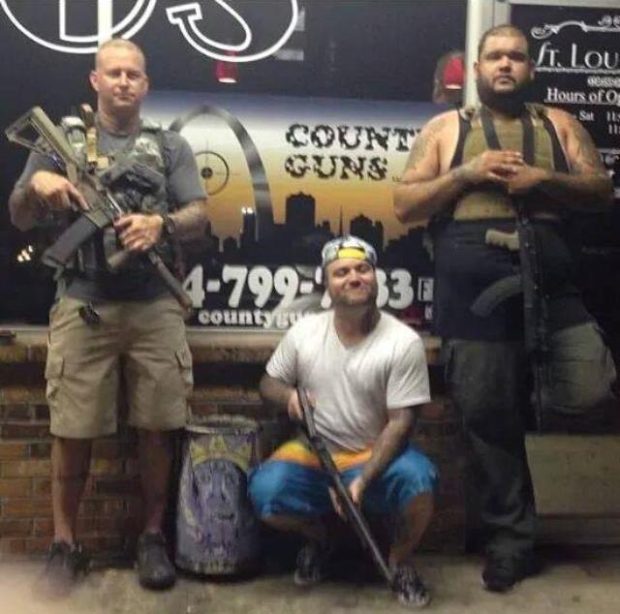 Mr. Bracken has been reading from my playbook. In a large-scale crisis situation there are going to be a lot of people who don’t currently own guns looking to become new gun owners.

What gun would be easy to operate, free of legal restrictions, and a good choice for home defense?

I think a 4″ K-frame revolver would fit the bill perfectly. For the past 15 years I have been stockpiling beat up Smith model 10 revolvers. I have almost 30 now. I bought each one for between $150 and $225.

Each gun has a belt holster, a speedloader, a speed strip, and a box of cartridges.

I will have the best apocalyptic neighborhood watch program on the planet.

Pay attention to this one. The current active killer trend is to go mobile. That’s what happened here, only the killer used a machete instead of a gun.

You should also note that he killed a 7/11 security guard with the machete and stole the guard’s openly carried pistol. Open carry is not a crime determent.

Check out my article about how to best stop these mobile killers. 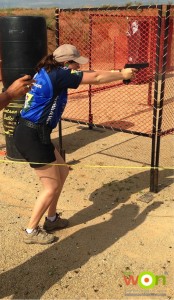 The Death of the Internet: Why sites like this are being taken down 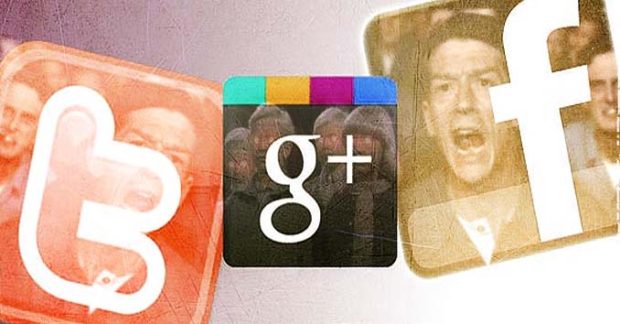 In today’s age, anyone who is a content creator in the field of anything even remotely controversial MUST own their distribution platform. Facebook, Twitter, YouTube, or Blogger can take you down for whatever reason they want. You can and will be “de-platformed” without recourse for appeal.

Yes, it’s nice not to pay blog hosting fees. But when you aren’t paying the bill, someone else has ultimate control on your distribution channel.

Web hosting for most sites costs about $10-20 a month. That’s a worthwhile investment if you want to control your own destiny. 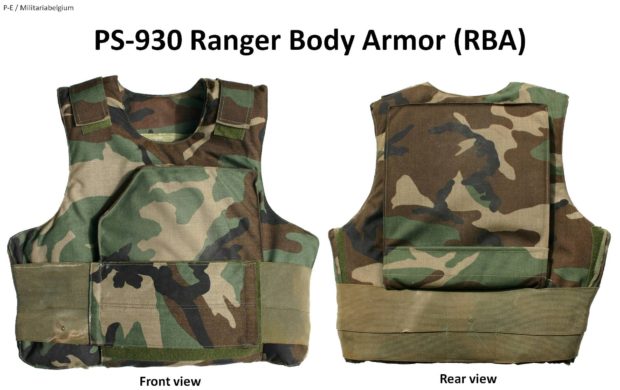 Ralph brings up an important issue here.  If the active killer has body armor, should you shoot for the head or the pelvis?  I tend to prefer the head, but Ralph makes a good case for the pelvis shot.  I really don’t care too much.  If center of mass isn’t working, hit him someplace else.

The one thing that makes me favor headshots is the fact that if he’s wearing a vest, it could be a suicide bomb vest rather than body armor.  Shooting him in the face may make it less likely that you are blown up if that’s the case. 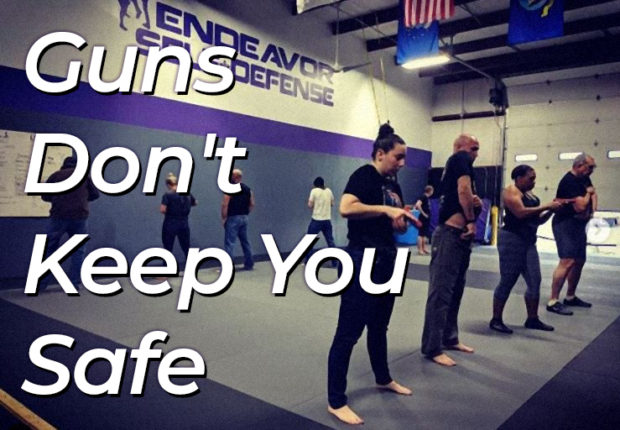 “There is no tool in this world that can guarantee safety. Your potential to survive a violent encounter is directly correlated to the amount of time you spend training. “

And Claude makes the point that in the long run, not even firearms and self defense training makes much of a difference to your survival.

Securing Your Stash: Do’s and Don’ts of Traveling with Money 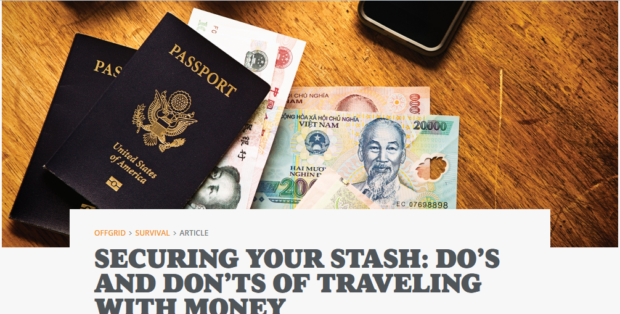 Keep your “bribe money” in a different location than all the rest of your cash.  Don’t deal with money changers.  Just use your bank card to take local currency out of the ATM.  It’s the cheapest exchange rate and you won’t get scammed or robbed.  It’s best to use a regular ATM card, not a debit card.  If you are using a debit or credit card for cash withdrawals watch out for DCC conversion charges.

No-One’s Life Matters. That’s Why There Are Mass Shootings

“Emil Durkheim’s 1897 diagnosis of “anomic suicide” describes the Columbine perpetrators as well as the 2016 San Bernardino attack by Muslim fanatics, the “right-wing” shooter in El Paso and the “left-wing” shooter in Dayton. They are individuals cut off from society, destabilized by change and despairing of their own place in the world. Such monsters always have been among us. But now we are cultivating such monsters by destroying the ties that bind us to each other, to our past and to our future.

Everyone used to matter. No-one matters anymore, not at least in the postmodern dystopia of invented identity. In the good old days we mattered because each of us was radically unique. We were unique as members of a congregation standing before the God who made us, and unique as parents watching over the children we had brought into the world. We knew that each of us had a singular purpose, first because God does nothing in vain. We hoped to make the previous generation proud of us, and the next generation worthy of its predecessors. Each of us had a mission that no-one else could carry out for us, and that mission was to raise children who were uniquely ours, and with whom we had a unique rapport through bonds of intimacy that no master’s degree in psychology could replace.”

What skills should we train and practice?

“Some folks spend a lot of time on thinking about how much spare ammunition to carry, how to carry it, and how to reload quickly. I think that time and effort would be better spent on practicing to make a good first shot, which is a skill many people need a lot of practice on.” 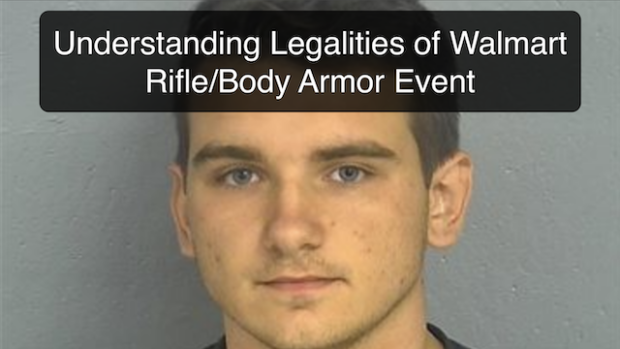 A legal analysis of the actions of a CCW carrier detaining a man armed with a rifle and body armor in a Walmart store. This is an important read.

Those of you who carry guns need to think through this type of scenario. I think we will see more and more of these events in the future. Escaping, following without engaging, drawing your gun, and even pre-emptive shooting the suspect could all be reasonable actions given the particulars of the scenario. You need to think about all of the possible outcomes of your actions and make an intelligent decision about what you might do (or not do).

And if you think you are “expanding awareness of our second amendment rights” by staging a stunt like this, you are an asshole. Scaring people is not a good way to make positive societal change. 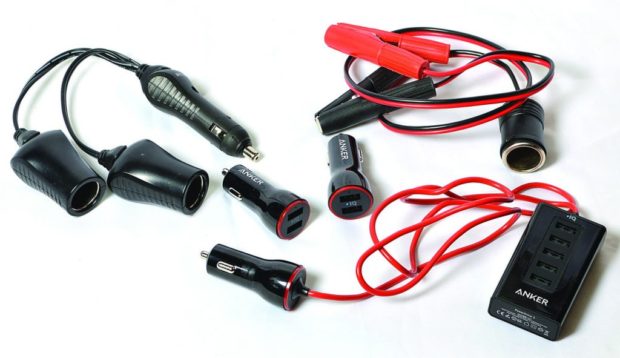 Some very sensible ideas about keeping your electronics powered up in an emergency.  You may also like the same author’s article titled Power Up Light, Water, Communications in Emergencies.

Use Your Car To Avoid Escalation

Watch this one just to see how bad a multiple attacker situation can be.  I can’t tell you how many calls we get as cops that start when people start yelling at someone else in or from a car.  Let that stuff go.  These egocentric dick-measuring contests get people badly hurt, killed, or locked up in jail.

37 Years of Mass Shootings in the U.S. in One Chart 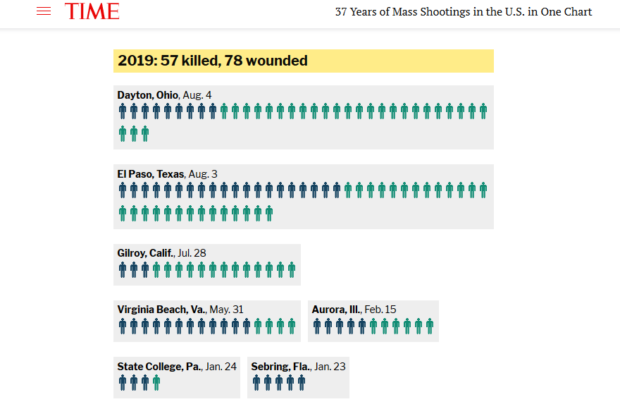 A handy resource for those of you who study active killer attacks.

Mass shooters seek notoriety, and we, the media, provide it. Is there another way?

“These perpetrators are specifically seeking a legacy,” said Adam Lankford, a professor of criminology at the University of Alabama.

One study of the deadliest 31 mass shootings since 1966 found that 87% of mass shooters expressed an explicit or circumstantial desire for fame and attention. Another study found that many mass shooters used previous mass shooters as inspiration, role models and idols, fueled by reporting on their backgrounds.

Thoughts from the Deck – Fighting vs. Shooting

The Dark Secrets of SHTF Survival 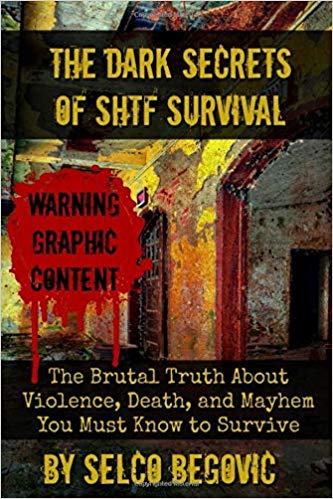 This is a collection of Selco’s writing about his experiences surviving the Bosnian conflict in the 1990s.  It’s a different date and a different place, but literature like this can provide some ideas about how bad things might get in the future.

LEOSA state by state: Why are retired police officers having problems? 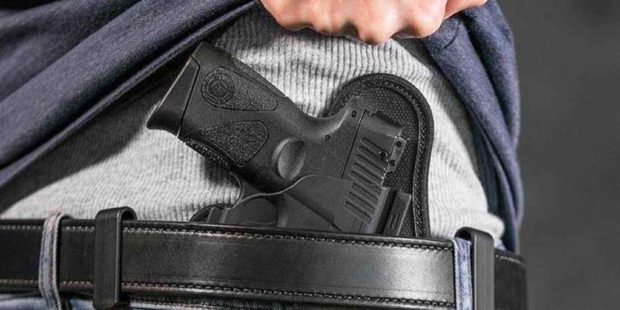 A lot of good information for off duty and retired police officers who want to carry nationwide.

If you are a firearms instructor, read this whole article so that you can understand how an individual got shot from an improper target set up in a “shoot house.”

Absolutely unacceptable performance on the part of the instructor.

I set up shoot houses at TDI for 18 years. During that time frame, we never had a shooting happen like this one. Why?

Because once the house was set up, TWO DIFFERENT instructors moved through the house on the path the student would take and checked the angle and backstop of every single target set.

Most police firearms instructors get “certified” after a 40-80 hour course. Very few of those courses include shoothouse design or safety. Most cop instructors just don’t know what they don’t know.

The downside of possibility

“Optimists are always a little disappointed.

If you live with possibility, the idea that things can get better, that with consistent generous effort you can make a contribution, then you also end up feeling just a bit let down that it didn’t happen this time.

The alternative is to insist on limits, to be a pessimist, to simply play it as written and only do your job, expecting the worst.

Sure, you could probably avoid a little disappointment that way, but how could it be worth the journey? What’s the point of all this risk, effort and connection if we’re not going to use it in search of better?”

Fight back to your Feet, with Craig Douglas of ShivWorks

Craig shares some important points about getting up after you have been knocked to the ground.  The technique he advocates is very sound, but some of you are quite honestly too fat or weak to make it work.  I’d ideally like you to fix those issues and get up like Craig suggests.  If you can’t do that, you can still get up in stages while keeping your head protected.  Laying to sitting.  Sitting to kneeling.  Kneeling to standing.  Each transition demands a pause and a threat evaluation.  If things are going badly, don’t be afraid to get back down on the ground.  To avoid getting blasted during your movement transitions is the ultimate goal. 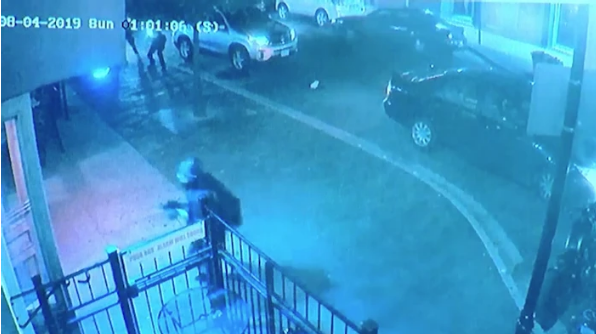 A long-form article written in an academic style that utilizes a lot of my research on active killer tactics.

My friend and fellow instructor Lou Ann Hamblin has been teaching active killer response tactics for police officers for many years.  She’s broadened her course material to make it useful for the armed citizen defender as well.  Lou Ann has a class on the topic in New York next week.  If you have some spare time, it would be a good use of your training dollars.  Click the link above for LouKa Tactical’s complete training schedule.