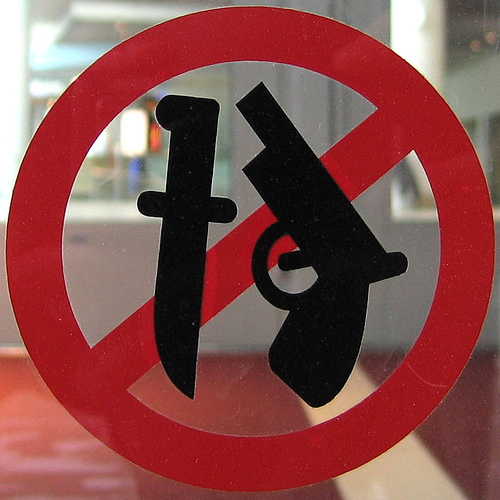 You are walking along the street when a man on a bicycle rides along side of you. The man suddenly hops off the bike.  He has a gun in one hand and a knife in the other.   Before you can act, he has closed the distance to within arm’s reach. What do you do?

That exact scenario happened to a man in Connecticut.  The man fought the attacker.  The robber was able to fire two shots, but neither hit the victim.  The victim was stabbed when he attempted to grab the attacker’s knife.  Read more about it at the link below:

Shots fired during struggle in robbery

Although this type of attack isn’t common, it does occasionally happen.  This story reminded me of an incident involving a California cop named Marcus Young.  A few years ago, I went to a class taught by Marcus.   His description of what happened was chilling. 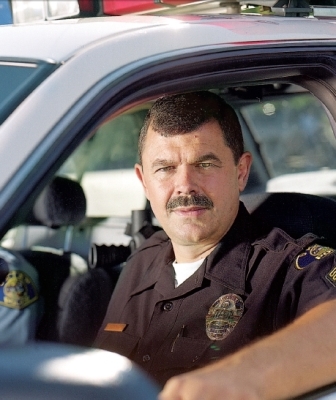 He was making a routine arrest of a female shoplifter when the woman’s boyfriend attacked him in a fashion similar to the incident above.  The boyfriend approached Young with his hands in his pockets.  From the article linked above:

“When Young told him to take his hands from his pockets, Beckman pulled a knife.

Young seized the felon’s arm twisted it toward his back. Beckman then drew a .38 Smith & Wesson from his jacket, reached across his body and shot Young five times. Bullets pierced his cheek, back and upper arm. “

Young’s hands were shot up and cut so badly that he couldn’t draw his weapon.  As his attacker went for a rifle in the cruiser, Young instructed a young police cadet rider to remove Young’s pistol from the holster and place it in his injured left hand (his dominant hand was too damaged to use) hand.  Young shot his attacker four times, killing him. 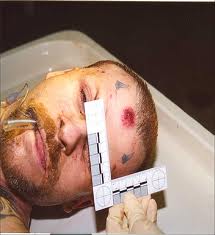 Neil Beckman’s autopsy photo…yes, those are devil horns tattooed on his forehead.

Have you ever tried to work out a solution to this problem?  It’s tough to do, even if you are armed.

Many uneducated instructors will advise something like “Get distance, draw your gun and shoot.”  That’s great in theory, but it doesn’t usually work in real life.  You can’t move away from him as fast as he can move towards you.  And how quick will your concealed draw be as the attacker is both shooting and stabbing you?

Getting distance usually isn’t going to work.  You have to move in and control the weapons.  Have you ever trained to do something like that?  Which weapon would you target?

I think the best solution here is to move to the OUTSIDE of the gun arm and attempt to control the gun.  Once the muzzle of his weapon is not pointed at your body, draw your own gun and make a few contact-distance shots (you’ve practiced that, right?).  Getting to the outside of the gun arm will limit his ability to do damage with the knife and gives you a few more seconds to act. 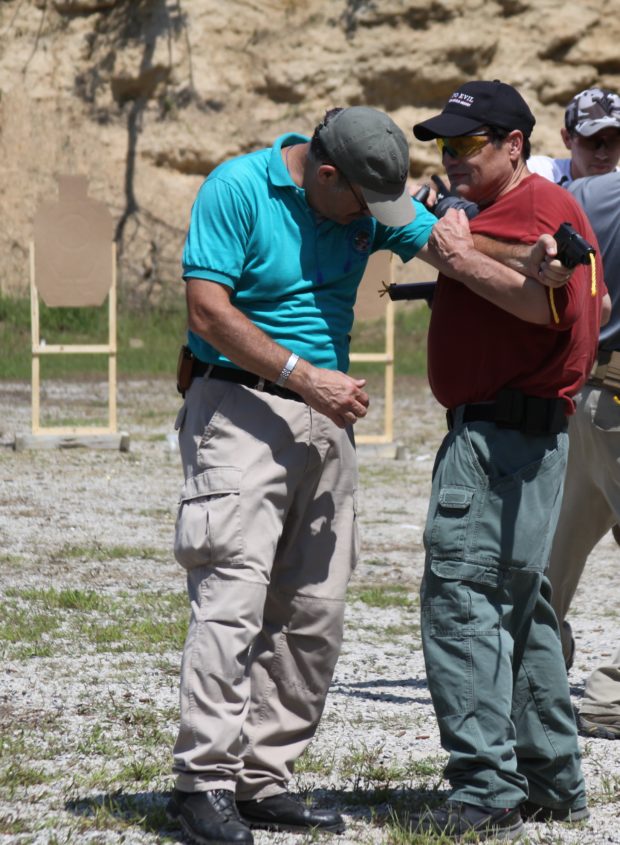 A student practices getting to the outside of the gun arm and firing from retention in one of Greg’s Close Quarter Shooting classes.

If you are unarmed, I would advocate the same move, followed up by either a throat or eye attack.  If you have some fighting skills, taking the attacker’s back and achieving a dominant position will provide you with some takedown options.  If you take him to the ground, you must go down with him to keep control of the gun.  Otherwise, the separation will give him the opportunity to shoot.

You may have to feign compliance initially to wait for the best opportunity to make your move.

Your homework assignment this week is to find a training partner and a simulated firearm and knife.  Start slowly and work through a solution to this problem that will fit with your skill set and abilities.